The food of love? Well, we are making cookies today . . .

My granddaughter perches on the kitchen stool, one loose-cannon leg kicking the rungs. She’s chatty, a tad restive. She waves the baby chick cookie cutter above her head. Then, surprisingly, she falls silent, pointing to the decal that spans the soffit. With a five-year-old’s zest she proclaims, “If music be the food of Love, pla-a-ay on.”

She grins briefly, then returns to cutting birdies from dough. Keira, aka Kiki, was once a hypersensitive infant we carried around on a pillow. She suffered acute sensory issues. Traumatized in utero by her birth mother’s drug habit, our little fledgling now reads Shakespeare.

Oh, the ageless effervescence of wonder — it tingles all over my body. I’m older than the average grandma, eager to savor each stage of growth while I still can.

As my friend Judi Carlson says, “What piece of our heart did God create to receive this kind of miracle? We adopt fragile children. And those children adopt us.”

Kiki, our impish dynamo, seldom sits long enough to hear a story through to the end. So when did the skill to read click? She’s a girl with places to go, faces to make, boundaries to test.

I slide her tray of ginger-bird cutouts into the oven. “Eight minutes,” I say. “Want to see the baby robins?”

We tiptoe to my bedroom window to watch the ramshackle nest on our deck.

Three fledglings yeep and chirr, jostling each other. Then, like harrumphing uncles, they rotate positions.

She wants to know why they are fighting.

“They’re getting too big for the nest,” I say. “And maybe they’re itchy. Look, they’re taking beak-baths.”

Chirping, Mama Robin swoops to the lawn, nabs a worm, heads for the nest. She embodies music, the food of Love — countless times each day.

I’ve watched her spread wings and tail over the nest during two hailstorms, her quivering pinions jeweled with ice. She’s giving her young every chance in a world where statistics show only 25% survive their first year.

The oven timer goes off, and we head for the kitchen, Kiki bouncing ahead of me — and off a wall or two. The thought comes to me, she’ll be okay, despite her rough start in life and her madcap ways. The cherishing God who knows when a sparrow falls is with her, and will be, long after I’m gone.

Whoever wrote Psalm 91 knew a thing or two about love: “[God] will cover you with his feathers. He will shelter you with his wings. His faithful promises are your armor and protection.” For now, I’m grateful the Deity shares part of that privilege with me.

Kiki and I frost the cookies and top them with sprinkles. Another gift. The robins, too, seem sent. Vulnerability dressed in feathers chooses my deck. My time. Me. From the nest’s inception to sky-blue eggs to scruffy hatchlings, I’ve eavesdropped on this family-in-progress day after day, for weeks. A living psalm.

Kiki takes bird cookies home to her mama. A few hours later I find the nest empty. Abandoned. I’m surprised by the ache in my chest. And how it spreads.

I would have loved to watch them fly.

Since then, I’ve used this breath prayer throughout the day, the one that’s been singing itself in my head lately, helping me let go.

What helps you release a cherished hope or a beloved being already in flux?

And this one, if you missed it, about the nest

My husband, Dreamer, sees her first:

Dear seamstress of April
stockinged in brown,
your bright apron a blur,
are you watching me
watching you?
How your beak darts
and weaves, hemming
the final layer of nest.

Lady Robin bustles about on the bench — four feet from our window. I pull up a chair. How might her story affect mine?

Sovereign Creator of Egg and Wing, attune my senses . . .

Still a rookie contemplative, I study her like a sacred text.

Like me, she briefly alights, only to flit. Seems we’re both distracted by hunger. (She eats roughly 14 feet of earthworms a day!)

When she’s inhabiting her grassy, mud-cup home, sometimes her tail nods like a feathered pendulum.

Loath to startle her, I emulate a statue.

During the second week, Lady Robin lays one egg per day, mid-morning. Three in all. Secret hemoglobin and bile brew that singular blue.

Perhaps her instinct’s drive resembles my need for a guiding word or phrase. I’ve slipped into lectio tierra, kissing cousin to lectio divina. Attending to an aspect of nature closely, I seek purpose and shape for my day, my actions, and outlook.

Psalm 84:3 comes to me: “Even the sparrow finds a home, and the swallow a nest for herself, where she may lay her young, at your altars, O LORD of hosts.”

Then, a prayer: Please, shelter the homeless. Comfort the besieged in Ukraine. Help my friend, recently widowed. Assist friends adjusting to new and smaller living spaces.

Does her patience flag? How gently she turns the eggs with her bill, ensuring her young will not stick to the shells.

The naked brood patch on her belly calibrates temperature. She alternately presses closer lest the eggs chill or lets them cool, briefly exposed. Ever watchful. Sharing her own heat.

Worry muscles in when the weather worsens. Again, she points the way.

Nightly frost? She hunkers down.
Sideways rain? Still undeterred.
Bucketing hail, the size of peas? She extends each wing, rim to rim, seals the nest with her own flesh.

Sovereign of the Skies, shield this faithful bird, this countryside altar jeweled with hailstones. You see us all, every creature.

Lady Robin shifts to face me. Pale feathered crescents outline her gaze. By now she recognizes me.

“If a robin’s near,” so the saying goes, “it’s a loved one watching over you.”

This May, it almost feels true. It’s the anniversary of my mother’s death. Decades ago, she read me The Secret Garden, with its merry robin coaxing an awkward child toward the hidden key.

Sovereign of Egg and Wing, your grace is the key to everything.

In another week, the eggs will hatch. Lady Robin and her mate will deliver takeout . . . 100-150 times a day. Book-ending each day with their calls — first voice of the dawn chorus and one of the last songs heard at dusk — they will raise their family. And teach them to fly.

A group is known as a round of robins. Up to 200,000 robins sometimes roost together.

Because the English first tasted oranges in the 1300s, robins, often called redbreasts, were not described as “orange” until the 1500s when the word “orange” came into use.

Photos of Robin in Tree and Robin on Statue taken by my great friend Larry Manne. Eggs and hail shot, yours truly 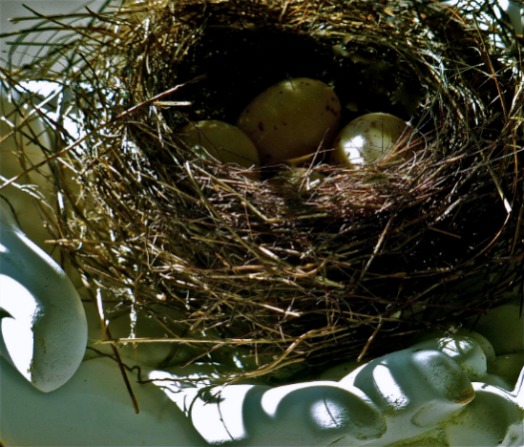