Homesick: who hasn’t felt it?

“Teal is your color, Laurie. It brings out your eyes.”

Teal: as in, our front door, sofa pillows, and afghan. Napkins. Glassware. Every single kitchen appliance.

And yes, a teal jumper or sweater plus knee socks came home with us in department store bags. Autumn meant surrender.

Autumn meant having Mom to myself.

END_OF_DOCUMENT_TOKEN_TO_BE_REPLACED

Alternatively, aren’t lasting, good impressions what we hope to leave after completing the job interview?

We want others to see us in the best light as we shake hands with the leader, the banker or pastor, the mentor or blind date.

Then there’s our significant other’s parents, met that first time . . .

Showcased under glass, at staggered depths, ancient plant fossils seem to float against dark wood. Smithsonian-worthy, the layout is masterful.

Painstaking work exposed each specimen from layers of rock. Equally rigorous science identified and classified them.

Organisms near a waterhole, inland sea, or lake sink into the mud.

Over time, weighty, accruing layers of sediment embed the organisms ever deeper. Water evaporates or moves on, the way water does.

Tissues disintegrate and minerals may penetrate the remains.

Bet you can guess why I like the “air scribe.”

Back in the lab, technicians manipulate the air scribe, a tiny jackhammer, to painstakingly remove the remaining matrix and expose the fossil’s intricate detail. 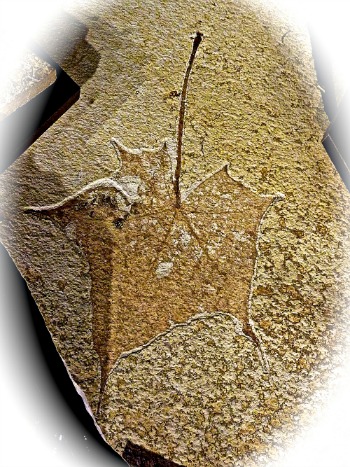 How do we make them? Leave them? Recover or rebuild them when things go amiss?

“Look for areas where you need to let go,” I read this morning.*  This implies surrender. Leaving something behind.

Every leaf on that fossil wall eventually yielded to forces beyond itself. I find myself reviewing my human interactions on our trip, thus far. Have I left a lasting impression of kindness? Courtesy? Warmth?

I once reviewed a novel for a literary journal. My review’s title? “We Were Here, and We Loved.”

I combed the book for key lines, layers of meaning, and vivid images to support insights I’d gained from reading the story—a painstaking process, not unlike chiseling out fossils.

We Were Here, and We Loved: Isn’t this what we hope our lives, our work, our words communicate?

Maybe there’s an unseen Air Scribe detailing our surrenders and endeavors. And a Curator, who preserves our stories.

Maybe there’s a gallery on the far side of today, and it exhibits the varied depth of our interactions with nature and people: Call it Hi-def, video-in-stone that angels or any celestial passerby can view.

The thought makes me smile. And bite my lip.

What kind of surrender is unfolding in you these days? Will you view your work as love poured out?

Have you read the story of Hannah lately, in 1 Samuel:1-2? She was taunted—for years—by the resident EFFW (Elkanah’s Fertile First Wife).

Hannah laid down her dream of a family, month after month, year after year.